Today I had the privilege of sitting in on the first rehearsals for my play, ‘The Haunting of Exham Priory’ with Rumpus Theatre Company (@RumpusTheatreCo on Twitter). It was a lot of fun to see the process of rehearsing, and very exciting to see the play finally being performed in front of me, rather than just in my head. I also had to, quite understandably, provide some input on the pronunciation of the more esoteric words from Lovecraft’s lexicon.

Devising minor edits on the fly was a new and interesting writing challenge. My writing style is best described as “slow and steady”, but I had to think fast today when the need arose to make changes to lines that didn’t quite sound right when read aloud.

As I said, an interesting challenge, but I think I just about managed to cope! 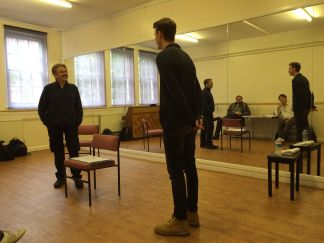